King Sabata Dalindyebo Local Municipality is a local municipality situated in the District of OR Tambo District Municipality in the inland of Eastern Cape Province in Republic of South Africa.

The Municipality was established before the 2000 local government elections when the Mthatha and Mqanduli transitional and rural areas were merged. 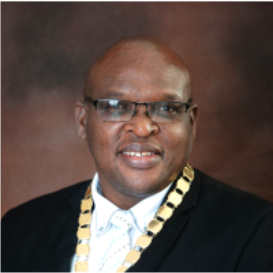 The municipality comprises two magisterial areas, viz. Mthatha and Mqanduli and their surrounding rural areas. The municipality is largely rural in character with the urban areas concentrated around the towns. It is 3 027 km2 in extent and had a population of 444 832 persons in 2007, which rose to 451 710 in 2011.The number of households in 2007 was 93 382, and this increased to 95 382 in 2011. The major economic activities in the municipality are forestry and agriculture, although agriculture is of more of a subsistence nature.

It is composed of a range of settlement forms and land uses, namely, urban areas, rural settlements, privately owned farms and small holdings. Neighboring local municipalities (LM) are Nyandeni LM to the North-east, Mhlontlo LM to the North, Engcobo LM to the West, and Mbhashe LM to the South.

To provide high quality services, socio-economic transformation, safe and sustainable livelihoods based on sound governance and commitment to meaningful public participation and protection of the environment. Shaping KSD to become “a municipality of choice to visit, invest, live and work”